Mussels are found in large quantities along the Dutch coastline. People collect mussels from natural beds or farm them for consumption on mussel plots in the Wadden Sea and delta region. In addition to people, shorebirds such as herring gulls and eider ducks also like to eat mussels.  Mussels attach themselves to stones or shells with the help of strong threads, known as the ‘beard’. For man and animal alike, it can be quite a job loosening a mussel from a stone. The threads keep the mussesl in place so that the sea currents don’t keep carrying them around. 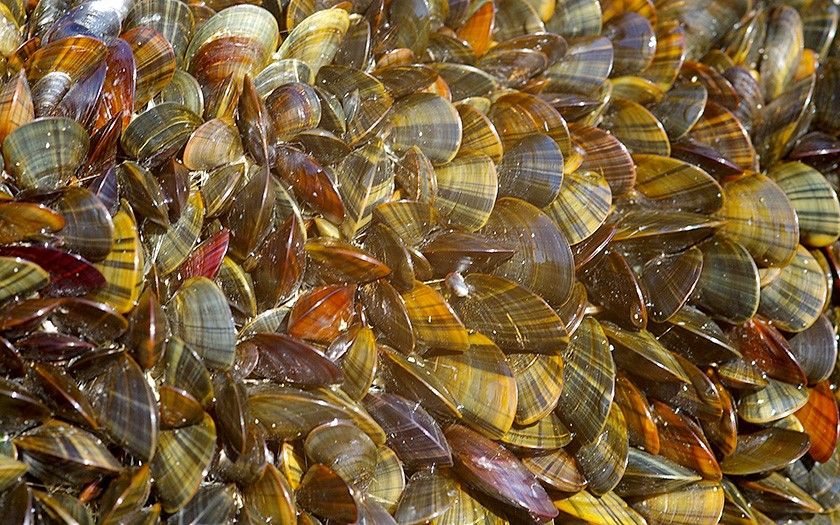 The ‘beard’ of a mussel is made out of extremely strong elastic threads of protein. That’s very useful when absorbing the blows from waves. There is an adhesive foot at the end of each thread, which glues itself to the underground. The glue is made up of very specific proteins. It’s amazing that this glue works so well in seawater and that the foot can glue itself to stones and shells as well as bacterial slime or a film of algae. There’s no human-made adhesive that has this combination of properties.

Seawater is becoming more acidic. The acid affects the byssus threads by making them weaker and the mussel glue less effective. This means that mussel banks can be more easily broken up and wash away during storms.

Mussel larvae can live in huge numbers in areas where there is sufficient food. This is how a mussel bank eventually forms. Many other marine animals live among the mussels, such as sea anemones, polyps and gobies. Mussel banks are vulnerable. In the Wadden Sea, most of the old banks were fished up by mussel fishermen. They scraped the banks in order to collect young mussels. This is what they call mussel seed and they use them to cultivate this shellfish on the mussel plots. According to the fishermen, storms are also the cause of the disappearance of the banks. Nowadays, fishing mussel seed is no longer permitted everywhere.

Biologists were concerned that the mussel would become much rarer due to competition with Pacific oysters. Consequently, shellfish-consuming birds, such as eiders and oystercatchers, would run into food shortages. However, it now appears that older oyster reefs have become very suitable underground for mussels and that the two species have no problem living together. We now see mixed shellfish banks in many areas.