The Wadden Sea is one of the largest tidal regions in the world. From Den Helder to the Danish Esbjerg, the region extends over three borders. The Wadden Sea is unique. The world changes at least twice a day. At one moment, you find an expanse of mud flats, kilometers-long. The next moment, everything is under water. The weather is often fierce and difficult to predict. If you want to survive, you need to adapt. No wonder the plants and animals in and around the Wadden Sea are so exceptional! That’s why the area has been given a special status: World Heritage. 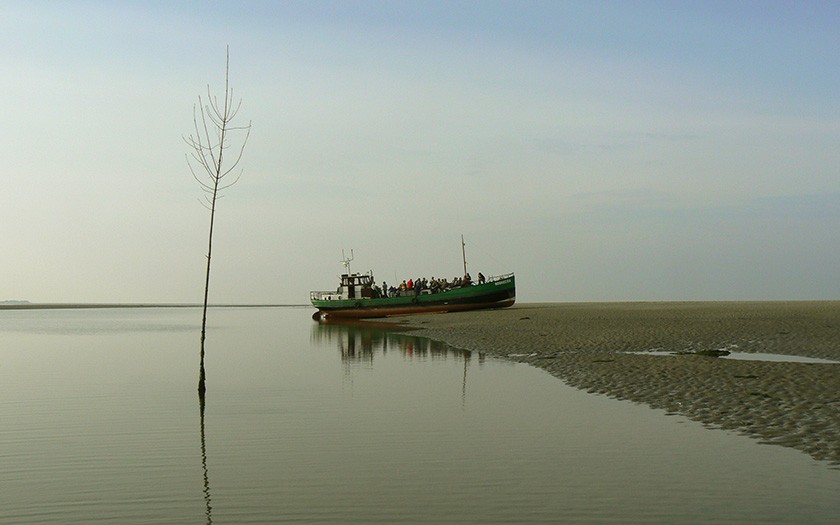 Formation of the Wadden Sea

The Wadden Sea hasn’t always been around like you see it today. Several thousands of years ago it started looking like it does now. The coastline is constantly changing, even today. To understand its origin, we have to go back to the glacial period which ended around 10,000 years ago. The North Sea was practically dry. You could walk from the Netherlands to England. Heavy winds blew enormous amounts of sand in the direction of Denmark, Germany and the Netherlands during the 100,000 years that the glacial period lasted. The North Sea started filling up around 10,000 years ago. That was at the beginning of the warmer period after the glacial period, the Holocene. A sandy seawall formed from waves and wind along the entire coast of the southern North Sea. Beyond laid extensive peat bogs. In the course of thousands of years, the seawall became increasingly broken by sea channels. The peat bogs behind the seawall eroded away when the sea broke through. It took a long time before the channels were so large that they met and formed a true inner sea.

Wadden Sea: With a little help from man

The wadden region took thousands of years to look like it does today. Nature did most of the work. However, people have also played a major role and are still doing that to this very day. In order to provide safe ground to live on, the higher and dryer parts of the bogs were raised. These mounds are known as terps. Around the terps and fields, dikes were built to protect man, cattle and crops from floods. On the seaside of the present dikes, you find salt marshes which often formed with the help of humans. Channels are continually filling with mud and often need to be dredged. In that way, we have a big part in shaping the wadden region. 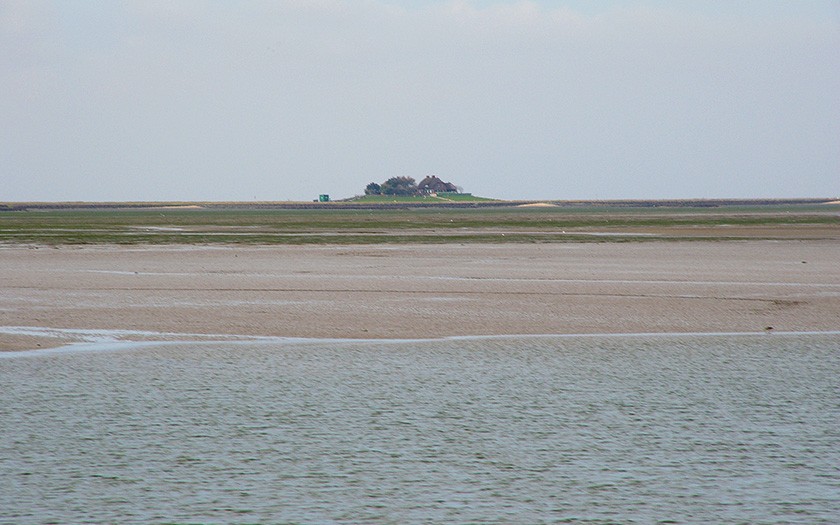 Tidal channels and mud flats in the Wadden Sea

On peaceful days it’s hard to believe, but the Wadden Sea can be quite rough. The strong currents make sure that no two days are the same. Tidal channels and creeks, the minor and major water currents, keep changing position. The seawater flows through the large channels with rising tides, spilling over the flats. When the tide falls, the water runs through the creeks back into the larger channels.

The tidal flats also shift. The flats are made up of sand and mud. The size of the particles and the movement of the water determine where sand and mud precipitate. Larger sand particles sink where the seawater is in motion, such as sea channels or close to the beach. The fine mud particles only precipitate where the water is motionless during high tide. The mud flats appear to be empty, but appearances are deceiving. They are crawling with life. The brown-golden layer on the surface is algae – plankton. Worms and shellfish live burrowed underneath. Some mud flats are covered with seaweed or eelgrass. 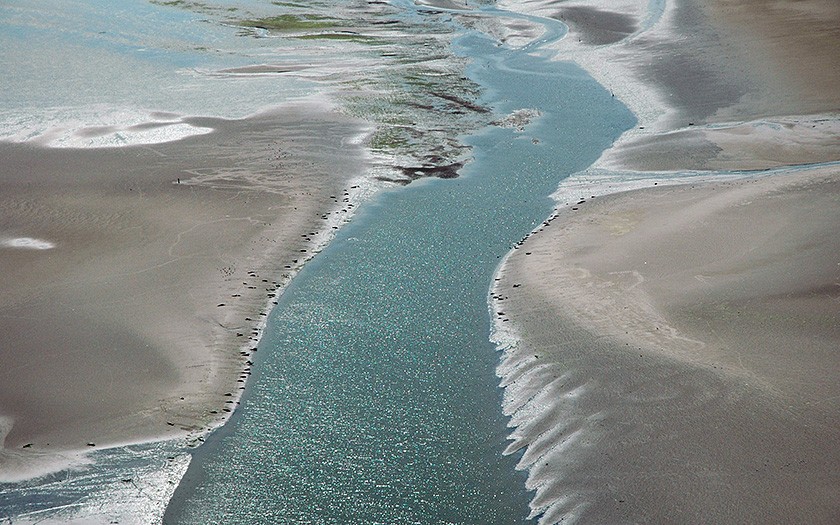 How the Wadden Sea got its name

Twice a day, half of the Wadden Sea lies exposed to the air, which is totally related to the tide. One moment you only see water, while a few hours later large mud flats appear. The Wadden Sea is named after the fact that once every so often you can wade through it. That explains the Dutch name ‘Waddenzee’, in Frisian the ‘Waadsee’, the ‘wadable’ sea. 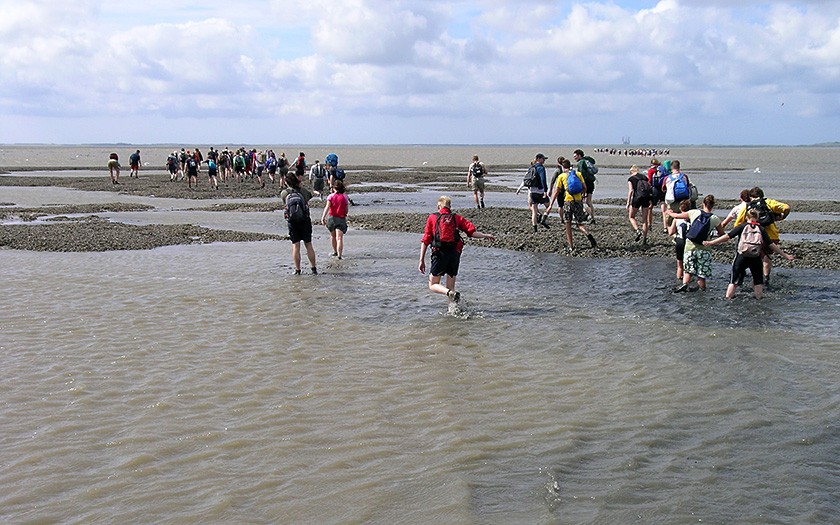 Tides in the Wadden Sea 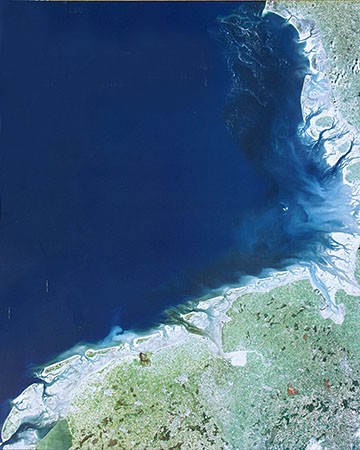 Slack tides in the Wadden Sea

An unusual phenomenon we see in the Wadden Sea is slack tide. This is the spot where sea currents collide behind an island or sandbank. The currents come to a halt and the water appears to be motionless. Very fine material carried in the water, such as mud, sinks to the bottom. This is how new land is created. An example is the flats near the Schorren on Texel.

Slack tides are the shallowest parts of the Wadden Sea. Only ships with a low draft are able to pass through during high tide. During low tide, this is where hikers can cross.

The Wadden Sea: Land of milk and honey

Not only does the tide determine the appearance of the wadden region. The rise and fall of the seawater also determine which plants and animals live here. During flood, the Wadden Sea receives a new supply of nutrients. These nutrients form the basis for a complicated food web. Microscopic plants and bacteria consume the nutrients, and in turn are consumed by animals, which are consumed by other larger animals. Without this supply of nutrients, there would be much less life in the Wadden Sea. Therefore, the tides are of vital importance. For better or for worse in the Wadden Sea

Unfortunately, the tides don’t carry only good things for the wadden region. In addition to nutrients, all sorts of toxic materials can enter the region, such as marine litter, oil or pesticides. Every once in a while, large amounts of a toxic substance is suddenly found. The reason is usually due to an accident on a ship, whereby containers with toxic materials fall overboard. For example, in 1994, thousands of bags with agricultural pesticides fell overboard. Fortunately, only a few of these poisonous bags reached the Wadden Sea.

Life in the Wadden Sea

The Wadden Sea is rich in nutrients, thanks to the tides. And nutrient-rich regions are rich in plants and animals. Nevertheless, you won’t find lots of different species of plants and animals in the Wadden Sea. That’s because of the extreme conditions. The sandbanks are first exposed, only to be flooded a few hours later. Temperature can suddenly change; oxygen and saline levels are constantly different. As plant or animal, you have to be able to tolerate all of this! 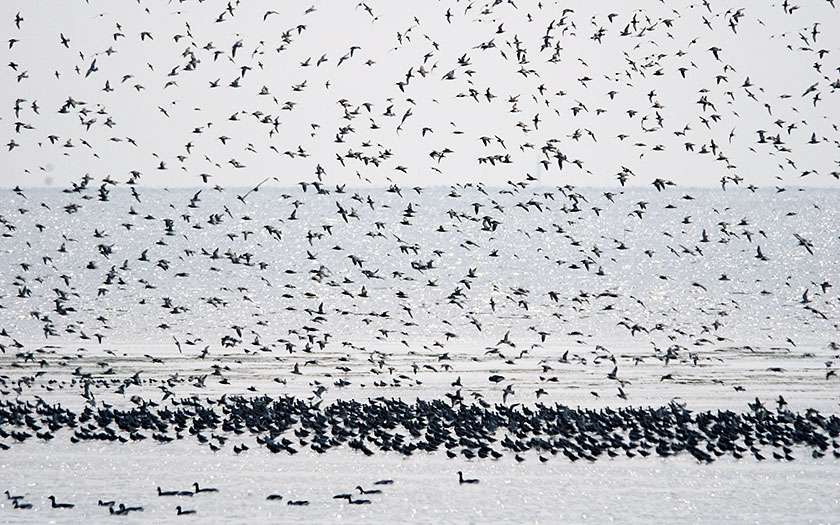 Newcomers in the Wadden Sea

In the Wadden Sea, you don’t just find plants and animals that have been here for thousands of years. There are also species that weren’t here originally, species from other seas. Sometimes they were consciously brought here by people. One example is the Pacific oyster, which was released in the Zeeuws waters for cultivation but eventually spread throughout the Wadden Sea. Other plants and animals come unintentionally, for example in the ballast water of a cargo ship or on the hull of ships. That’s how the sand gaper arrived in Denmark from North America in the Middle Ages, and from there it spread throughout the Wadden Sea. Most likely, these shellfish traveled as larvae or live food for the Viking traders. The American razor clam followed the same route, although nine centuries later and as larvae in ballast water with modern freighters. Since 1980, these razor clams have been inhabiting sandbanks off the North Sea coast. Sometimes, thousands of their shells are found in large piles on the beach. A number of other species are now able to survive in the Wadden Sea because the water is warming up. New immigrants are continually arriving in the wadden nature. A new plant or animal species is discovered every year. 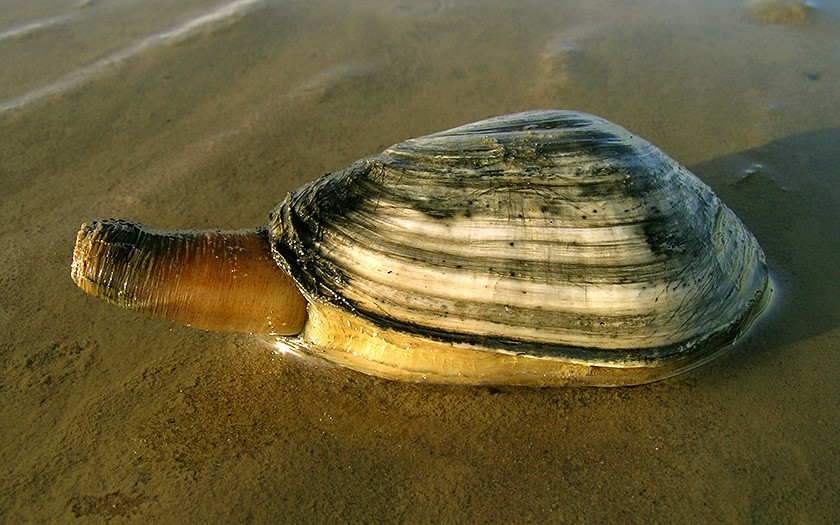 Almost disappeared in the Wadden Sea