Just about the entire Dutch North Sea coast is made up of sandy beaches. You find the widest beaches on Terschelling and Schiermonnikoog. For most plants and animals, the beach is not a fine place to live. There are only a few species which really feel at home. The beach protects the coast.  A broad and high beach slows down the waves. That is why sand that has washed away is replenished. We call this sand nourishment. Beaches are also important for recreation. Where there is no beach, artificial beaches are sometimes made for the tourists. 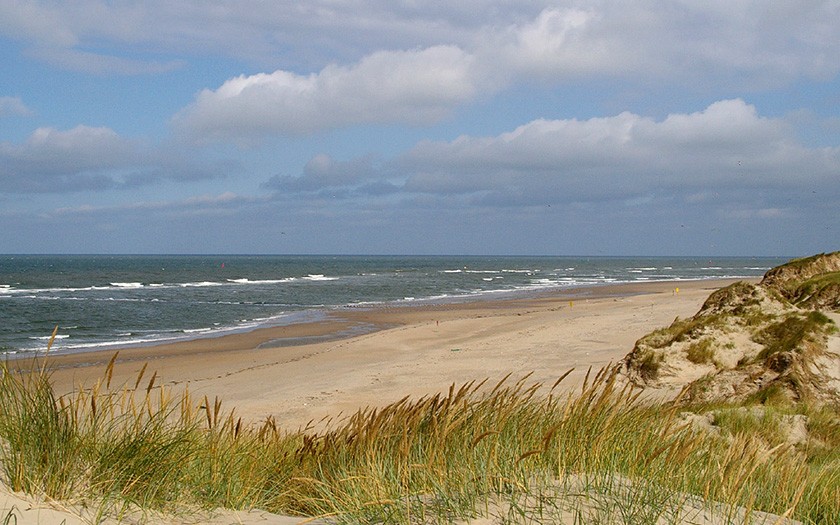 A forebank lies seaward of a beach. It can consist of one or more sandbanks. The beach begins at the average low-tide flood mark and ends at the foot of the dunes or cliff. In order to protect the weak spots along the coast, Rijkswaterstaat often replenishes the forebank with sand, which is extracted elsewhere in the North Sea.

Flood mark on the beach

When the water reaches its highest point, at the climax of a high-tide period, it stays at this level for a short period of time. Everything rolling back and forth in the surf has time to wash ashore. You can see an obvious strip on the beach, made up of random objects (flotsam), seaweed and shells: the high-tide flood mark. Often times, there are several flood marks. The wind doesn’t always push the waves far up the beach each time, so the flotsam doesn’t necessarily lie along the same line. 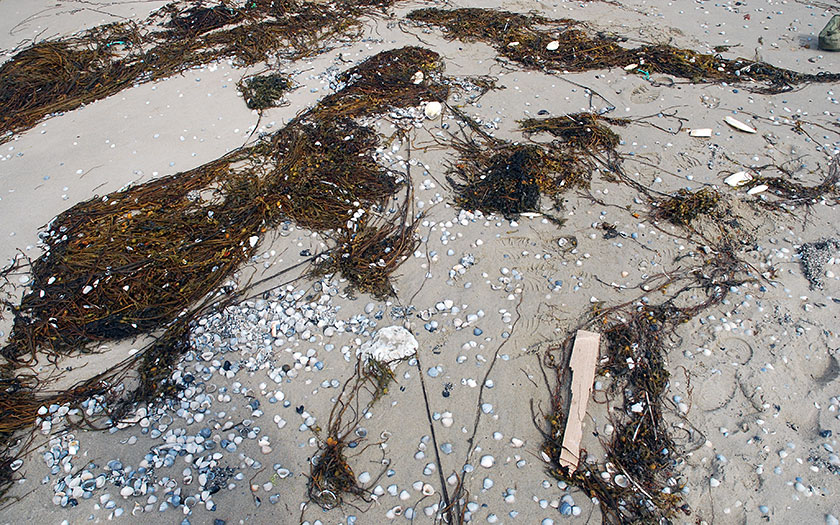 Tidal zone on the beach

The tidal zone is the stroke located between the high-tide and the low-tide flood marks. It is an exceptional place: twice a day, it is land; twice a day, it is sea. The animals which live here must be able to endure a lot. There aren’t many species which can. The animals are mostly small crustaceans such as: speckled sea lice, sand hoppers and various species of shrimp, which burrow into the bottom. There are several species of worms that also live in the sand. Young fish, shrimp and crabs are carried to the beach by the waves. 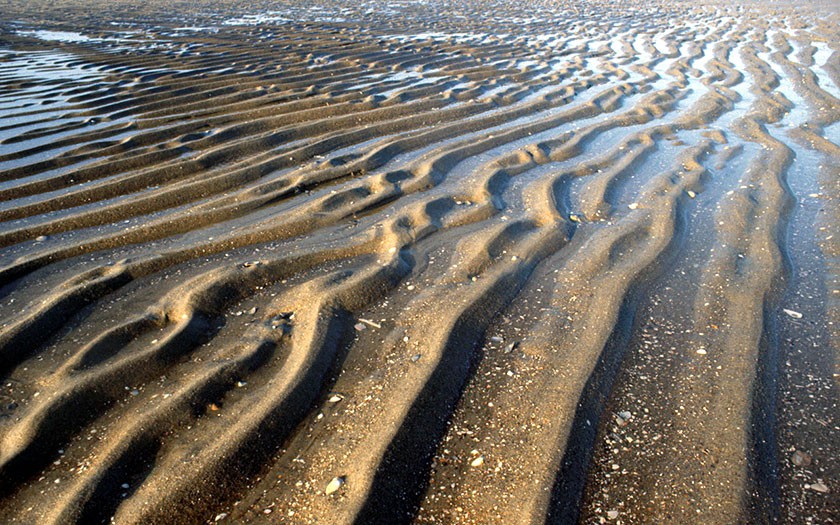 Flotsam on the beach

You can find are all kinds of interesting objects on the beach. It’s not always clear what it is. For instance, you often find yellowish-white balls, as big as a tennis ball, with small bladders. These are egg capsules from the whelk. Eggs (mermaid’s purses) from the thornback ray look like black plastic boxes with pointed protrusions in the corners. Carapaces from cuttlefish are white brittle oval shell-like things. Everyone usually recognizes jellyfish, crabs and shells. But that’s not all that washes ashore: pieces of net, rope, plastic, empty milk cartons and bottles, often dumped from ships. Visitors also leave rubbish and lost objects behind. People that search for valuable things are called beachcombers. There’s often a lot to be found on the beach, particularly after a storm. The most unimaginable objects are ship loads of timber, sneakers, bananas or cigarettes. ‘Unfortunately’, the modern container transportation has not made life better for the beachcombers! Less desirable and even dangerous are the medicine, paint cans and other toxic materials that are dumped overboard. Objects on the beach, from under the sea

You can find things on those parts of the beaches which are recently replenished with sand dredged up from the sea floor by special hoppers. If you’re lucky, you might find bones from ice age mammals, such as mammoths or giant deer. In 2001, a Belgian collector from a piece of bone on a beach in Zeeland. It didn’t take long to recognize the unique find: a piece of skull from a Neanderthal who lived in the North Sea region around 40,000 years ago. It is now the oldest known inhabitant in the Netherlands. The piece of bone has been extensively studied and can be seen in the National Museum of Antiquities in Leiden. 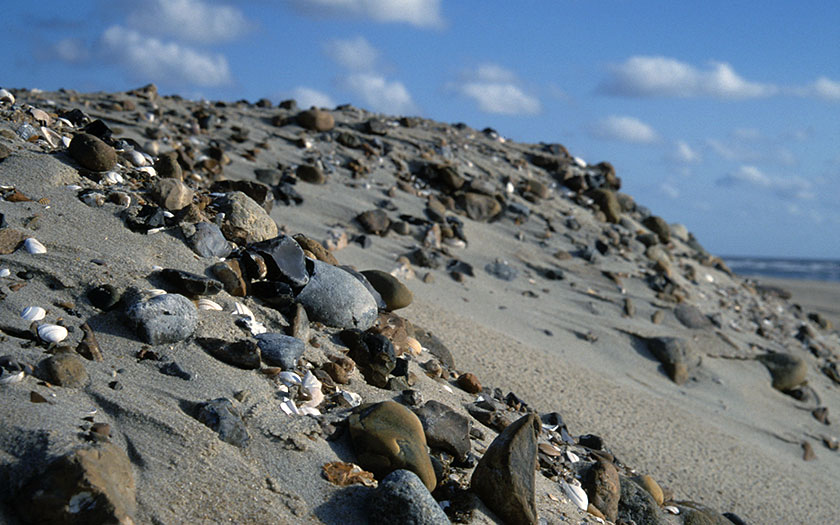 There are barely any plants growing on the beach. It is much too turbulent a habitat. Even the toughest annual plants such as sea sandwort, prickly saltwort and sea rocket can only survive closer to the foot of the dunes. Sand couch is the only perennial plant found on the higher portions of the beach. All of these plants need some (fresh) rainwater to germinate and grow best in the flood mark where rotting seaweed provides a bit of fertilizer. These plants often wash away during a storm. In order to survive longer, these pioneers need broad beaches. 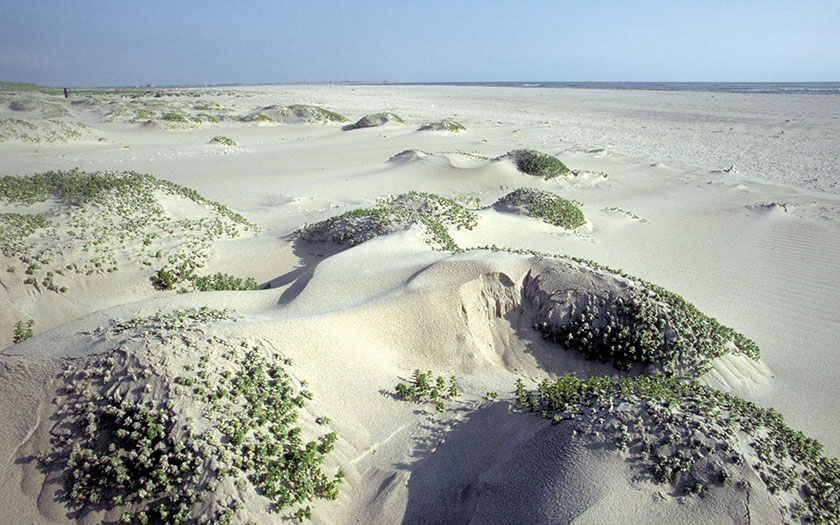 Sandy beaches are difficult places for animals to live. They must be able to survive floods and there is often not much food around. The animals must be resistant to major fluctuations in temperature, dampness and salinity. Only a few species of invertebrates, such as sand hoppers, gammarids, the isopod Eurydice pulchra and the worm Nerine cirratulus, are capable of offering resistance. A number of specialized insects live higher up on the beach: beach flies (coelopidae) and several beetles (carrion and darkling beetle). Most of these animals, including birds living more inland, search for food along the flood mark. 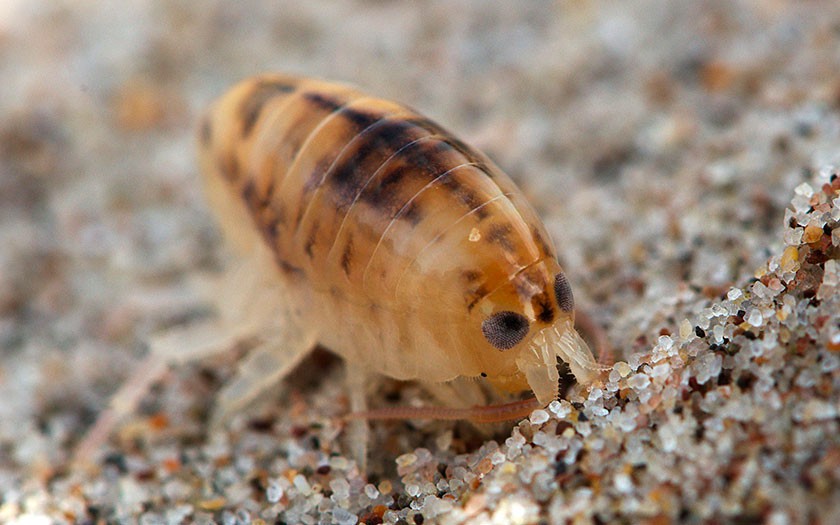 The litter found on the beach is not necessarily from the day before. Sometimes it’s been laying there for dozens of years, such as explosives from the World War II. Large amounts of mines and explosives were rendered harmless after the war, but some were left behind. During the summer of 2000, ammunition from the war was found on the beach of Zandvoort. The oldest human ‘litter’ which you might find on the beach consists of flint tools dating back to prehistoric times! 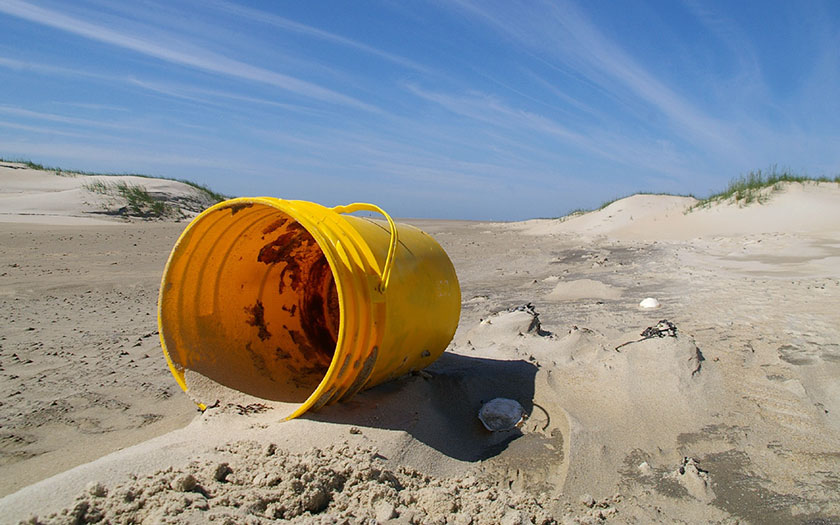