Dunes are mounds of sand, interspersed with lower lying areas, dune slacks. They are created by the wind, and sometimes anchored in place by plants. Coastal dunes begin where the beach ends. A dune area can consist of one to several rows of dunes. A large part of the south-eastern North Sea coast is made up of dunes. They are a natural form of coastal defense. Due to the continual influence of the sea and the wind, they are constantly changing. You find a rich plant and animal world here. In addition, dunes are important for recreation and drinking water reservoirs. 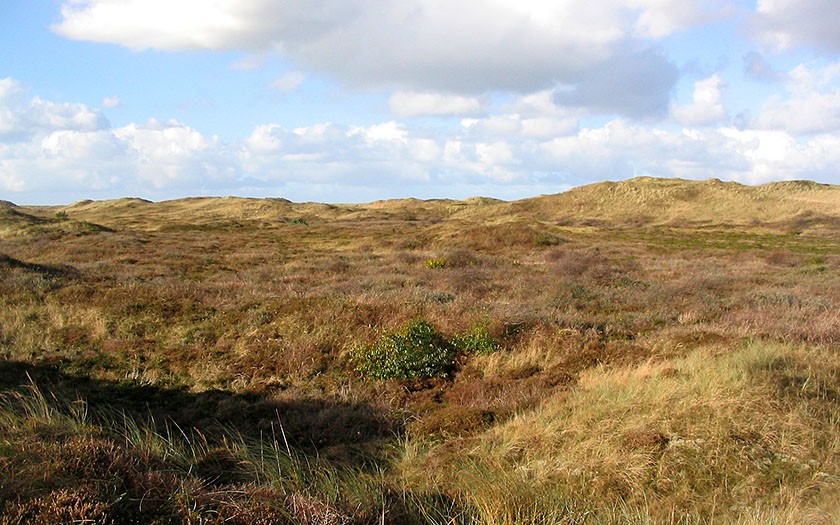 A wealth of nature in the dunes

A dune landscape has lots of variety: beach ridges, dune grasslands, open dunes, lakes, creeks, marshy and dry slacks, brushwood and woodlands. Because of this diversity, there is a great variation in species. In the Netherlands, 254 kilometers of the North Sea coastline (40,000 hectare) is made up of dunes. These dunes form only 1% of the total surface area of the Netherlands. Despite that fact, at least 75% of all Dutch plant species grow in the dunes and of the 190 species of Dutch nesting birds, 140 make their nests in the dunes. 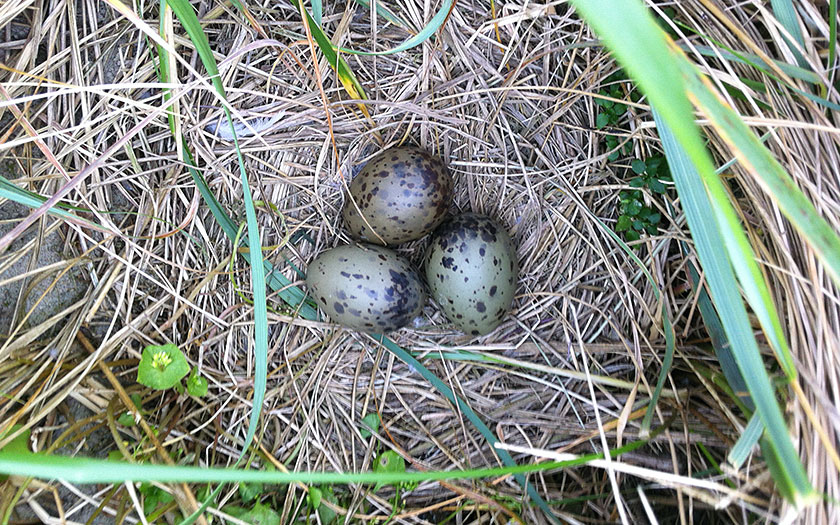 Calcium in the dunes

There are two categories of dunes in the Netherlands: the calcium-rich southern European and the calcium-poor northern European dunes. The boundary between these two regions lies in North-Holland, by Bergen-aan-Zee. The difference between the two regions lies in the sand. Sand from the southern dunes comes from the rivers. That is relatively rich in calcium and nutrients. Sand from the northern dunes comes from the sea, blown here during the last glacial period by the wind when the North Sea lay exposed. The sand grounds of Drenthe, the Veluwe and the Utrechtse Heuvelrug (lateral moraine) are made up of the same sand. It is very poor in nutrients and calcium. That is very determinant for which plants can grow, particularly in the older dunes. For example, you only find heather fields along the coast north of Bergen. Beaches and dunes form along sandy coasts located adjacent to shallow seas and usually a predominant onshore wind. A small bulge on a beach can be enough to start dune formation. It is less windy behind the bulge so the wind-blown sand stays put. As long as it doesn’t wash away and the wind continues to supply sand, the dune will continue to grow. Plants help a dune to form. They hold down wind-blown sand with their stems and leaves. A mini dune can form behind a tuft of grass. Sand couch is very good at doing that. This species is able to take root in salty sand and has quite a lot of leaves to catch sand. When the dune has grown around one meter in height, rainwater will be retained in a freshwater bubble under the surface. Marram grass will now start to dominate the scene. It grows quickly, holding down even more sand.

When the young dunes grow together into a new beach ridge, new dune slacks will form on the land side. Other plants start to grow, such as sea buckthorn. This plant adds nitrogen to the soil with the help of bacteria which live in the root tubers. Thick bushes of elder and a ground cover of stinging nettles and blackberries profit. Eventually, all of these plants together stop the sand from blowing away.

Overgrowth, eutrophication and dessication in the dunes

Many parts of the dunes are suffering from dehydration due to water extraction, forestation or coastal erosion. Almost everywhere in the dunes, there are problems with eutrophication: ammonia blows into nature areas from farmland, forming an extra unwelcome supply of nitrogen. The combination of dehydration and eutrophication has led to an increase in grassy vegetation in the dunes.
Unusual plants such as grey hair-grass, grass of Parnassus and all kinds of moss and lichens, then disappear.
The consequences are also disastrous for many bird species. Curlews, skylarks and northern wheatears have declined drastically. They have made room for species which prefer bushes and trees, such as the whitethroat and chiffchaff. Many butterflies and other insects that used to be common in damp dune slacks have since grown scarce.
In many dune regions, the overgrowth is tackled by removing the top layer of soil, raising the groundwater and using ponies, sheep, goats and cattle. 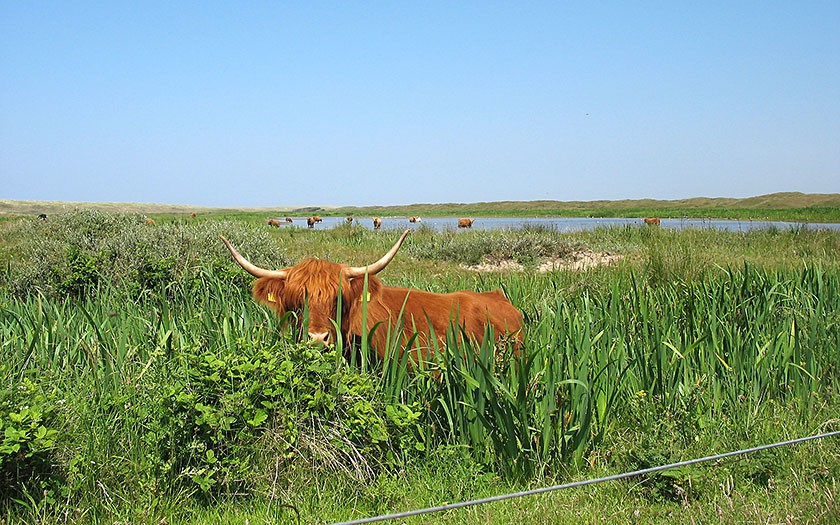 You wouldn’t say so if you live in the Netherlands or Belgium, but seen on a global scale, coastal dunes are rare. Rocky coasts are much more common. Due to the rarity and the richness in species, dunes are valuable nature areas. The Netherlands carry an important responsibility for protecting the dunes. Many dune areas have been turned into nature reserves or National Parks. However, there are many places where little is done. The greatest population density in the Netherlands is in the western part. Every piece of land is fought over. In the Dutch dunes, there are neighborhoods, industrial areas, military terrains, fields for bulbs, amusement parks and campgrounds. The Belgian coast is built up even more.

On Texel, you find young dunes and young dune slacks mostly on the Hors. The oldest dunes and dune heaths are found between Den Hoorn and De Koog. Some dunes are very busy, others are visited less often. Busy dunes don’t necessarily mean less nature. The richest location of sea holly is at the end of the Badweg in De Koog, one of the touristiest places on the island! A lovely varied dune landscape with flowery dune fields, steep slopes, small woods and lakes is the Muy. The Texel dunes form an exceptional and valuable area that has been designated as National Park since 2002. 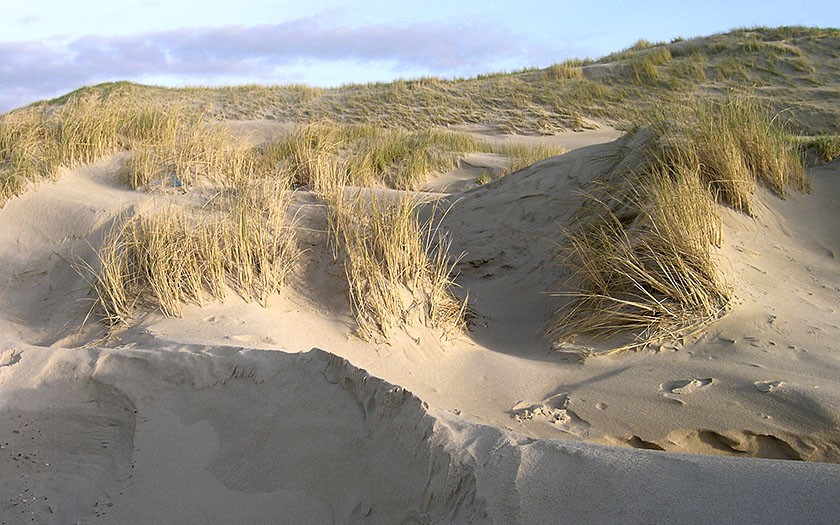