With its spoon-shaped bill, brilliant white plumage and long legs, the spoonbill is an elegant bird to spot. It ‘spoons’ food out of the water by sweeping its bill back and forth. In 2011, around 2300 pairs were breeding in the Netherlands, with the majority found on the Wadden Islands. Spoonbills prefer to breed in undisrupted areas within 50 kilometers from their foraging grounds. ‘Undisrupted’ in this case means specifically: out of reach from predators. 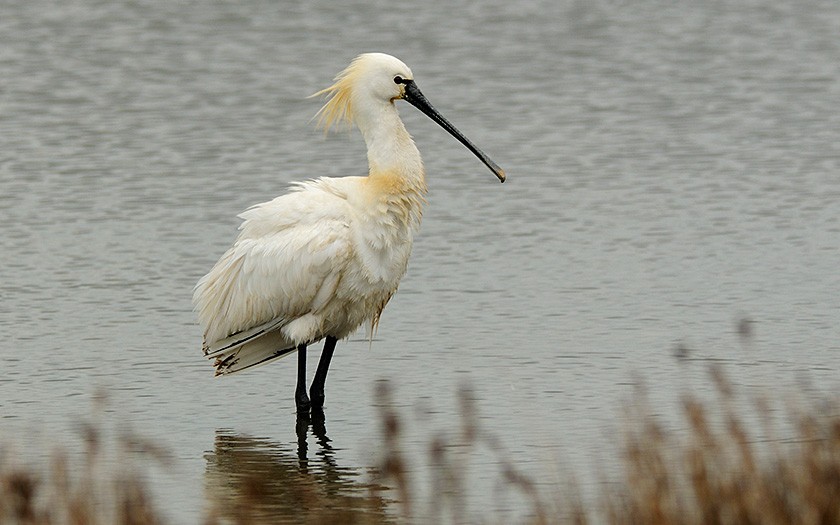 All of the Wadden Islands have nesting colonies; in total, more than 60% of all Dutch spoonbills nest on these islands. The first Wadden Island colony formed on Texel (in the Muy) after 1900. They estabished a colony on Terschelling in 1962, on Vlieland in 1983 and on Schiermonnikoog in 1992. It took another two years for them to discover Ameland, and another two years for the first successful nest. In 1998, the first nesting spoonbill pair was seen on Rottumerplaat and in in 2000, the species started nesting on the salt marshes of the Balgzand. The first spoonbill to nest on Griend was in 2010. Since 2004, spoonbills have been removed from the Red List for threatened and vulnerable bird species in the Netherlands. 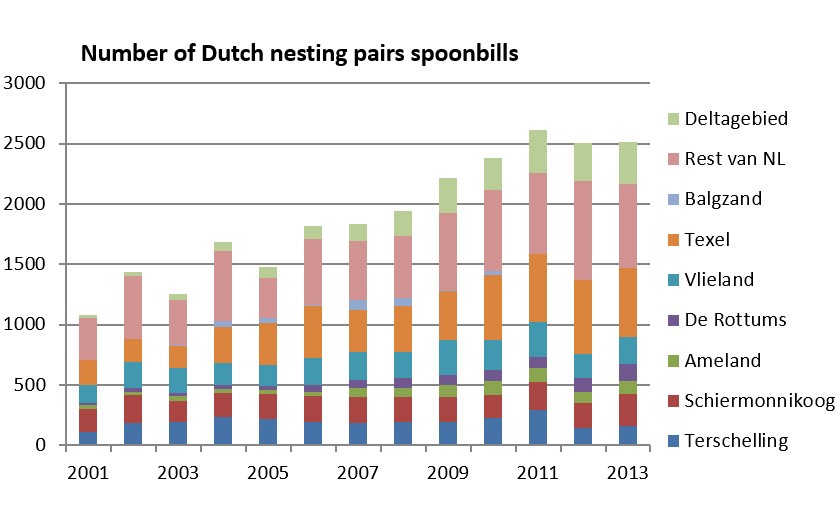 Spoonbills in the winter in the Netherlands

Nowadays, spoonbills are sometimes seen in the Netherlands during the winter. They often hop back and forth between marshy areas in the Dutch dunes, either alone or in small groups. Every once in a while, they venture the crossing to Texel. There is little known about the chances of survival for these winter guests in the freezing Dutch environment. Shrimp are usually out of reach since they move to deeper water in the winter. Therefore, the spoonbills must depend upon small fish in dune lakes and ditches. If these freeze over, the situation becomes critical.

Spoonbills that nest in West-Europe spend the winter primarily along the West African coast, such as the tropical tidal area of Banc d’Arguin off the coast of Mauritania. A small number remain in Europe and spend the winter along the coasts of France, Spain and Portugal. They rest in various areas along the way to gather strength for the rest of the journey. These resting areas are of vital importance for migrating birds. The longer the trip, the longer the spoonbills need to build up their strength. The total migration can take up to two months. During the migration to Africa, around 60% of the young are killed by hunters, predation, exhaustion and most importantly electricity wires.

In early February, the spoonbills depart again from their winter regions. The return trip is underbroken more often. Friesland is their last meeting place. From there, they fly to their nesting colonies.

In 2009, two of the spoonbills on Texel were provided with transmitters. Spoonbill Eckard flew to the Banc d’Arguin in Mauritania, spoonbill Loran flew to the Khniffiss Lagoon in the Western Sahara. Unfortunately, all contact with the birds was eventually lost. 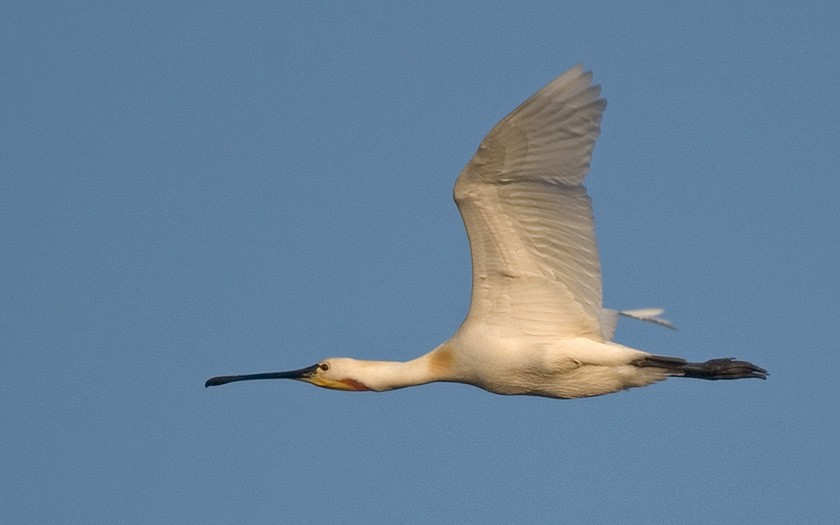 Salt marshes are important breeding grounds for spoonbills. However, the disadvantage to these breeding areas is that they flood every few years during storms and extra high tides. If this happens during the breeding season, then the eggs are lost or the chicks that can’t get to safety on time drown. In such years, it is possible that hardly any chicks are raised. This is a disaster, but as long as it doesn’t happen too often, then it isn’t a big problem for the species. They make up for their losses the following year.

However, scientists have now seen that the seawater level in the past decades is continually so high that the marshes flood more often, particularly during the breeding season. For the Wadden Sea, that means that more than 60% of the nesting pairs lose at least one nest per year. The flooding risks due to climate change are expected to increase in the coming years. 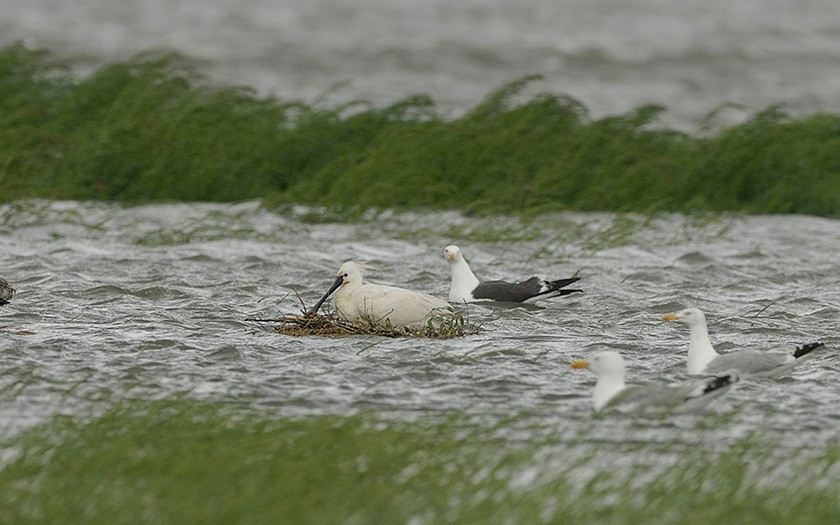 Spoonbills fishing along the coast

The spoonbills on the Wadden Islands face a lack of food when they arrive in the springtime. They usually eat shrimp which they find in the shallow channels and creeks of the mud flats. However, the water near the surface is still cold in the spring, so the shrimp swim in water too deep for the 30-cm long beak.

The three-spined stickleback is a good alternative. This fish migrates from salt to fresh water to spawn in the spring. The spoonbills stand ready along the ditches to catch them. However, there aren’t many places where these fish can readily make the voyage to fresh water due to dikes and sluices. Therefore, special stickleback passages have been built in several places in the wadden region. Via these passages, they are able to reach fresh water … and sometimes the beak of a spoonbill. 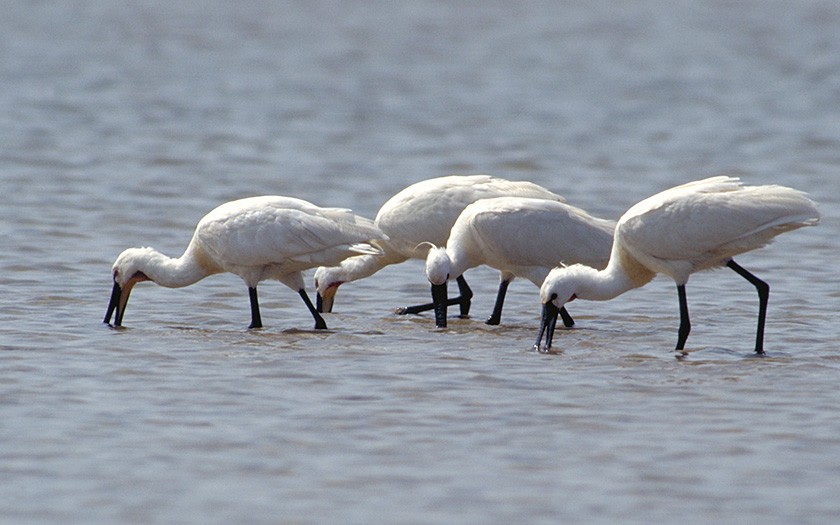 The spoonbill is the most famous nesting bird on the island. However, they have only been nesting here yearly since 1933. Before then, they nested here very irregularly, probably because people collected the eggs. There are now three stable colonies: in the Geul, the Muy and on the Schorren. A small fourth colony in the Slufter started developing in 2018. The colony in the Geul is the largest in the Netherlands. In 2015, there were 641 nests counted on the island, a new record. The spoonbills on the Schorren have constant problems from flooding since the salt marsh lies outside of the dikes. In some years, many nests washed away. Nevertheless, the population has grown since the last century.