Grey seals are true sporters. They easily swim from the Wadden Sea to England and back again.They are less shy and much more curious than harbour seals. The pups are born in the middle of the winter on undisturbed sandbanks in the Wadden Sea. The vicious wind blows constantly in their faces but these tough young animals have a thick white winter coat during their first few weeks to protect them. 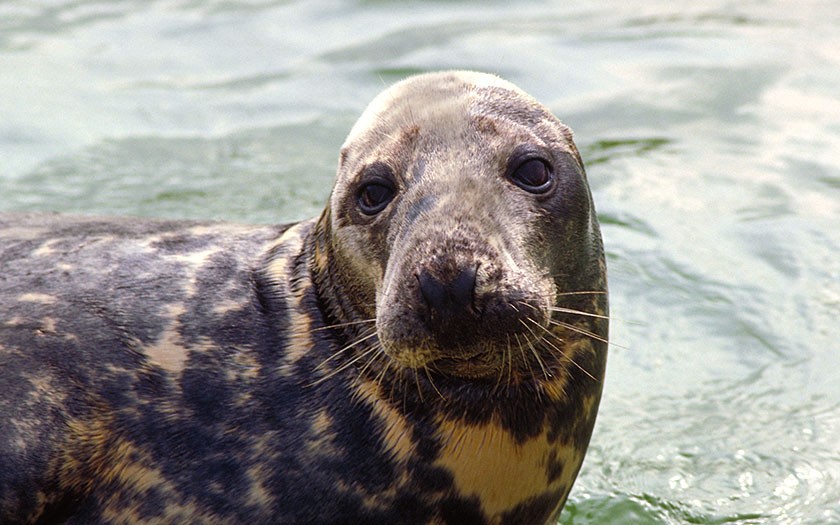 Grey seals are the largest predators in the southern North Sea. Adult males can grow up to 3 meters in length. They have powerful jaws and sharp teeth. They usually keep a distance from people; however they aren’t shy. On the contrary, they are curious and playful. That means when a grey seal is fed or even petted, they can start playing dangerous biting games. In Zeeland, a diver who wanted to swim with a grey seal, suffered bite wounds. You can compare this to bears: grey seals have a friendly look but remain true predators. Our advice: keep your distance when one is in the area and don’t feed them!

Distribution and habitat of grey seals 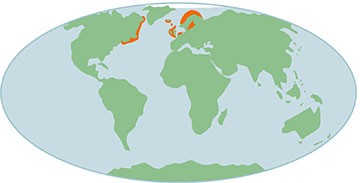 Grey seals live along the coasts of the Northern Atlantic Ocean. They can be found in the Baltic Sea, by Iceland, the Faroa Islands, Norway to Great Britain and by Northeastern Canada.

In the North Sea, most of the grey seals live around the Scottish islands, along the British coast. This population represents 40% of the world population of grey seals and 95% of the European population. There were around 30,000 grey seals in the entire the North Sea in 1965. Now the population is estimated at around 150,000. It grew particularly fast at the end of the 1970s when commercial hunting was banned.

In the Dutch Wadden Sea, the first two colonies were located on both sides of the sea channel to Terschelling and Vlieland. Since around 2000, there has also been a group of grey seals on the sand islands around Texel, such as the Razende Bol and the Hengst. In 2013, 909 grey seals were counted in the Zeeuws coastal area. And every once in a while, a grey seal is reported in fresh water.

In the 1980s, the first stable colonies of grey seals formed in the Wadden Sea, one in the German Schleswig-Holstein and one in the Netherlands between Terschelling and Vlieland. The very first reports date back to the second half of the 1960s, when grey seals were spotted in Schleswig-Holstein. Since the millennium, grey seals are also found on sandbanks by Texel, such as the Hengst and the Razende Bol. Along the Zeeuws coast in 2013, 909 grey seals were reported. Occasionally, grey seals are even seen in fresh waters. 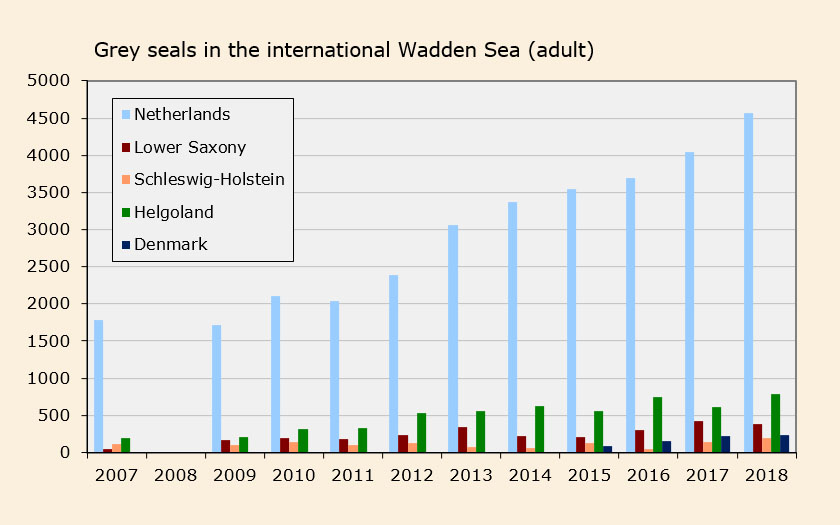 Seals have no problem living in brackish or fresh water, as long as there is enough fish. Seals used to swim upriver more often. However, since most Dutch rivers are now shut off by sluices and dams, it’s not that easy to reach inland waters anymore. Nevertheless, it still happens. Seals are regularly spotted in the closed freshwater IJsselmeer and in the major rivers. The most adventurous have even reached Maastricht. In order to achieve that, the animals must have slipped through sluices while boats were passing through or when the gates were slightly open. After a period of time, they swim back or let themselves flow back to sea when waterways are drained.

Photos and reports from eyewitnesses have shown us that grey seals have no problem finding food in inland waters. Every once in awhile, one is spotted with a large fish in its mouth. Strollers walking the ‘jaagpad’ trail from Middelburg to Vlissingen even witnessed a grey seal catching a swan and eating it up.”The only thing remaining was a pile of feathers”.

Large prey consumed above water is easy to witness. Smaller prey is more difficult, since they are swallowed under water. No one sees it happening. Up till now, it was unknown what grey seals eat in Dutch fresh water. However, a grey seal that washed ashore on the freshwater side of the Afsluitdike (Closure Dike) has helped to solve the riddle. While looking for the cause of death, scientists also looked at the stomach contents. They found seven different species of fish in the stomach and digestive system of the adult female. Perch, flounder, ruffe, zander and smelt were consumed the most. These are species were all caught in the IJsselmeer.

Population of grey seals in the Dutch Wadden Sea

The grey seal is part of the original Dutch coastal fauna. Fossil finds have shown that the grey seal has lived here for a very long time. During the Medieval Times, coastal inhabitants annihilated the grey seal in the Wadden Sea, so that this species of seal became a rarity here until around 1980. Fortunately, the grey seal has returned. Because it received better protection in Great Britain, the population there grew rapidly. The animals roam to the Dutch North Sea and Wadden Sea.

In the Netherlands, the grey seal population is growing steadily. For example, in 1992 there were only 150 counted. In early 2003, there were more than 1000 adult animals. Strangely enough, scientists counted fewer grey seals in early 2007. The most plausible explanation is that they moved elsewhere, perhaps to Helgoland where a new colony has developed. Growth continued in 2008 and 2009. In the winter of 2017/2018, 4565 grey seals were counted in the Dutch wadden region, including 821 pups. Because the growth was so great, scientists think that a large number of seals from Great Britain emigrate to the Wadden Sea every year. 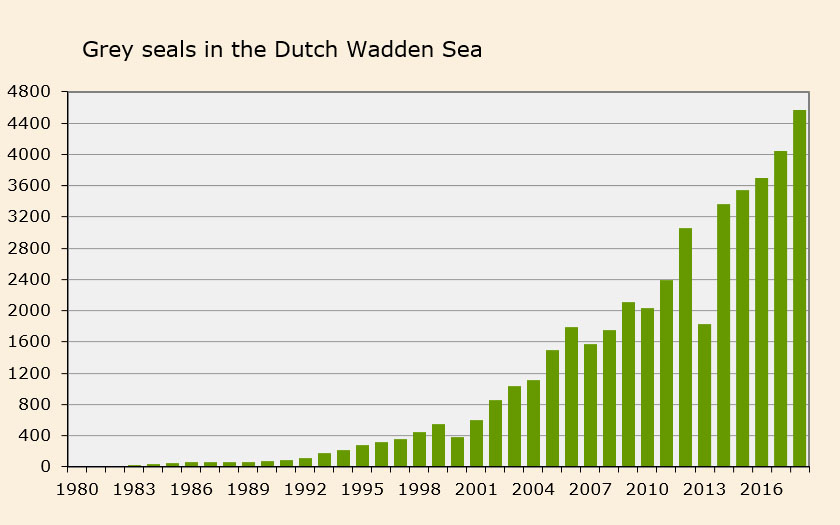 Population of grey seals in the delta region

Grey seals were seen again in the delta region for the first time since Medieval Times in 2003. In 2004, a pernent group started to form, which grew to more than 900 in 2013. Grey seals give birth during the middle of the winter. The pups have a white, long hairy pelt and weigh 10 to 20 kilograms. When they drink milk from their mother, they gain 1.5 to 2 kilograms per day! After birth, they must remain on dry land a few weeks until they shed their furry coat and build up their fat reserves. That isn’t always easy. The sandbanks Richel and Noorderhaaks, where lots of Dutch grey seals are born, sometimes flood in the winter. That only happens during spring tide and flood, but during some winters the water rises so high that the young animals wash off the bank. They can be found spread out over the wadden coast and are then brought to the seal sanctuaries.

It seems that grey seals in the Wadden Sea are birthing earlier. The first pups are now often spotted in early December. 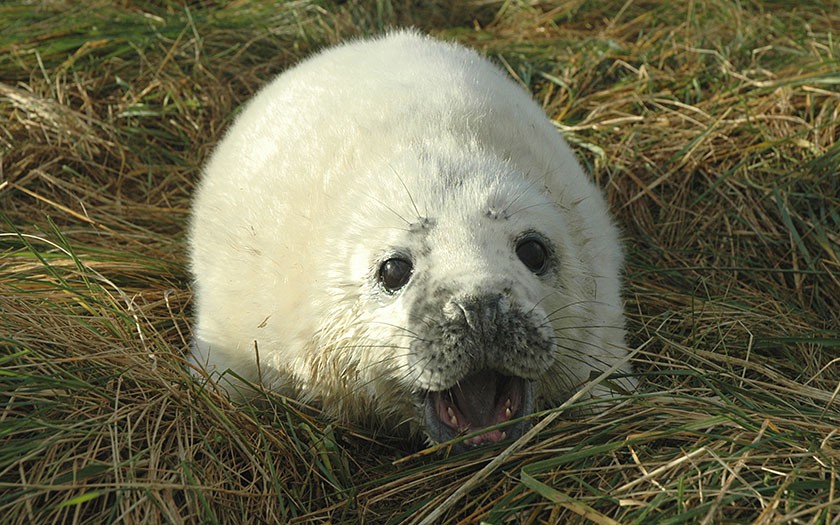 The grey seal is on the world conservation union IUCN’s Red List for protected mammals. In addition, there are special reservations for grey seals. Two islands in the Orkney Archipel in the northern North Sea (Faray and Holm of Faray) were designated as Special Areas of Conservation (European Habitat Directive). This is where large well-established colonies of grey seals give birth to lots of young seals.
On 1 August 1999, the Scottish Wildlife Trust purchased the uninhabited island Linga Holm. This 56-hectare large island is home to a large colony of grey seals. The organization is hoping this island will become officially protected as well.

Since 2000, a group of grey seals have been inhabiting the Razende Bol, a sand island southwest of Texel. There are around 50 seals. The western part of the Razende Bol is closed to the public because of the seals lying there. Every winter, young lost grey seals are found along the coast of Texel. They are mostly brought to Ecomare. In addition, there are three grey seals permanently swimming at Ecomare.