Sperm whales are the largest toothed whales on earth. Males are usually much larger than the females. The head in particular is enormous, accounting for one third of the entire body. One the other hand, the lower jaw is remarkably narrow. The females are social animals: they make friends for life. Sperm whales eat giant squid, which live at great depths. Therefore, it’s no wonder that these whales are specialists in deep diving. The record stands at a depth of 2800 meters. That is why they live in oceans, although every once in a while a sperm whale strands on the coast of the North Sea. 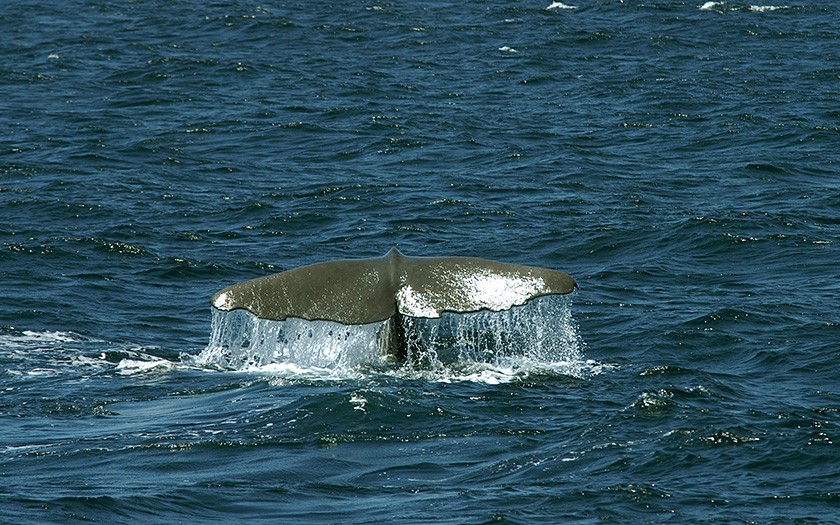 Sperm whales are very deep divers. They can hold their breath up to 2 hours, although an average stay is usually around 45 minutes. How is that possible? Scientists recently discovered the secret behind why marine mammals can stay under water so long. They possess a certain protein in their muscles which helps to bind oxygen. This protein, myoglobine, retains the oxygen until the muscle needs it. In that way, sperm whale muscles are not constantly dependent upon fresh oxygen which is supplied via blood circulation. Large amounts of this protein in other animals would clot, but the protein molecules in deep diving marine mammals have a different structure whereby they repel each other and avoid clotting. Thanks to this anti-clotting protein, sperm whales are able to stay under water for such a long time and dive so deep. 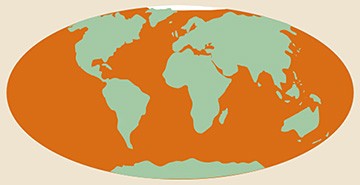 Strandings of sperm whales along the Dutch coast

During the 16th, 17th and 18th centuries, there were at least twenty sperm whale strandings along the Dutch coast. Usually, reports of sperm whales in the North Sea concerned two or three at a time, always young males between 12 and 18 meters long. In the autumn, groups of young bachelors leave the large pods of mothers and calves, which swim in the deep tropical and subtropical parts of the oceans. They probably leave the pod because they can dive deeper and longer than the females and juveniles. Therefore, they can make use of other hunting grounds. From the mid 18th century till 1937, no strandings of sperm whales were reported along the Dutch coast.
In 1937, two sperm whales stranded by Terneuzen. Since then, there have been more than 10 beachings in the Netherlands.

Sometimes, a sperm whale that beaches with low tide is able to swim away again at high tide. In December 2003, fishing vessels chased a group of three lost sperm whales near Ameland into deeper waters. In November 2004, two live sperm whales beached on the Richel, off of Vlieland. With all the manpower and equipment they could find, they pushed the animals back into the water and they were never seen again. This spectacular rescue was overshadowed by the murder of Theo van Gogh in Amsterdam, which occurred the same day. 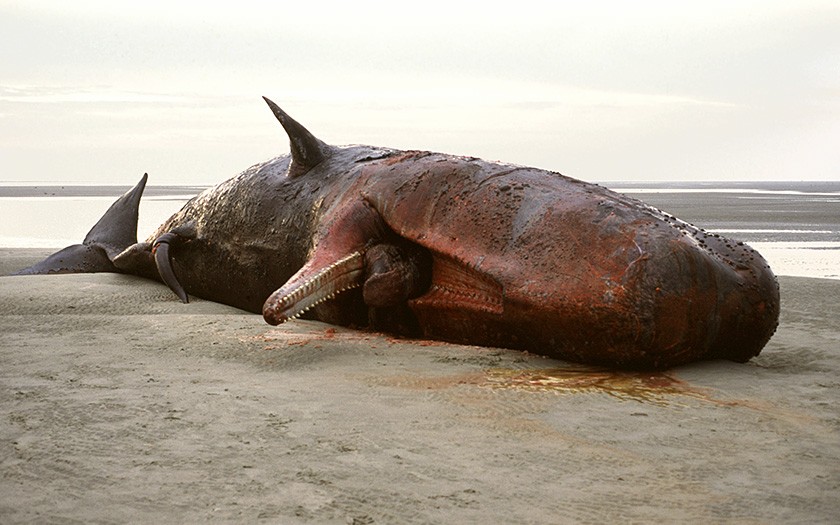 Scientists in Germany found a remarkable relationship between the number of strandings and the activity of the sun. Sun spots and explosions of the sun disrupt the earth’s magnetic field and could upset the whales’ sense of direction. Whales that normally hunt in deep water, always run risks of stranding in shallow water. They ‘see’ using sound waves (a kind of sonar system). The sandbanks interfere with their sonar, confusing the animals.

In 2004, scientists discovered that stranded sperm whales showed traces of caisson’s disease. There was damage to bones, called osteonercrosis, which would occur when ascending too rapidly. Caisson’s disease occurs with scuba divers when they ascend too rapidly to the surface, causing the nitrogen in their blood to bubble. It causes much pain and can even end in death. Scientists think that whales could be frightened by noises under water and then ascend too quickly.

When sharp squid beaks end up in the intestines of a sperm whale, they imbed in a mixture of amber fat and partially digested squid carapaces. This prevents damaging the wall of the intestines. During the deep-sea dives the sperm whale makes, the balls of ambergris are pressed together into larger pieces which become just as hard as wood. Sometimes, a piece is found on the beach.

Ambergris has a property for binding odors: a perfume containing a small amount of ambergris continues to give off its scent much longer than perfume not made with ambergris. That’s why it’s still used in the perfume industry and is so valuable.

There was an extremely large amount of ambergris found in the rectum of the sperm whale which stranded on the Razende Bol off of Texel on 15 December 2012. Directly after being discovered, the pieces weighed a total of 83 kilograms. The value of this amount was estimated to be several tons. 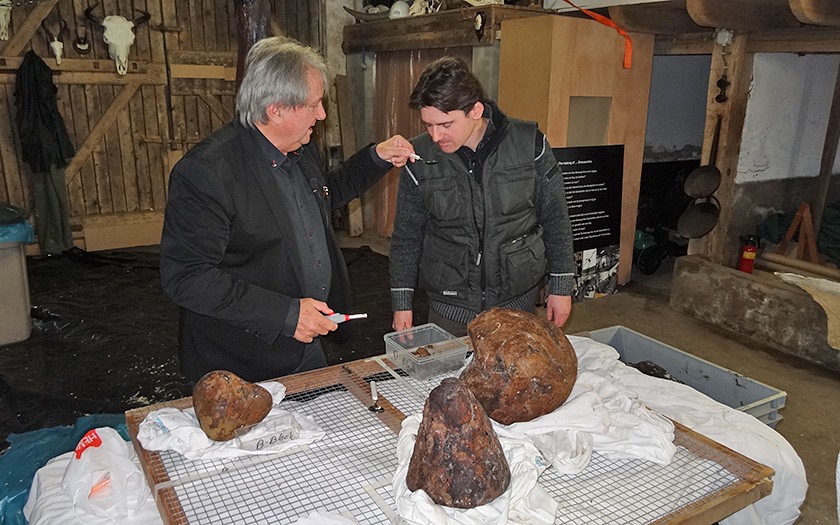 In earlier days, sperm whales were hunted a lot. The costly spermaceti in the enormous head of the animal was particularly sought. That is a waxy substance used for making candles. Spermaceti candles give the clearest illumination. Nowadays, material from the chemical industry is used. Spermaceti was also used in the cosmetic industry as a basis for ointments.

Spermaceti is the main component of sperm whale organ which allows the animal to dive so deeply. The whale is able to close off the blood supply, whereby the spermaceti cools off to the point of solidifying. The density increases, allowing the whale to dive more readily. When the whale lets blood flow through the spermaceti, it becomes fluid again. The density declines so that the whale can readily ascend to the surface.

Hunting sperm whales has been banned in the Atlantic Ocean since 1987. In the 1970s, more than 6000 sperm whales were harpooned. In 2000, Japan announced their plans to hunt sperm whales again.

On December 15 2012, three days after the beaching of the humpback whale Johanna, a sperm whale also beached on the same sandbank, the Razende Bol. The sperm whale was dead. Because Ecomare was the only organization interested in the animal, and prepared to make any effort to salvage it, the museum was given the sperm whale. While dismembering, large pieces of rare ambergris was found in its rectum, weighing a total of 83 kilograms. French experts and a study made by the University of Utrecht estimated the value to be several tons. The skeleton of the sperm whale is being exhibited in a special Whale Hall in Ecomare. 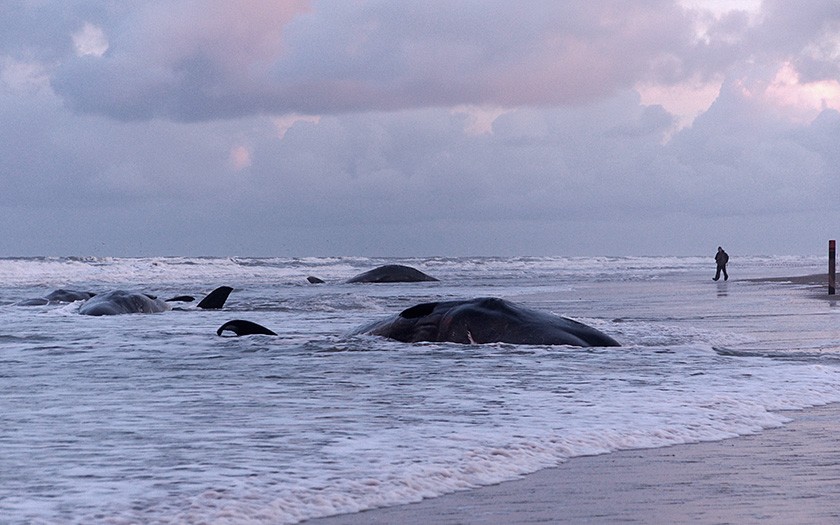 Years before that, in 1953, a sperm whale stranded on the Hors. There wasn’t much left of the animal. Gerrit de Haan, director of the Texels Museum, collected what was left of the skeleton. Unfortunately, the upper skull was missing. An upper skull was found close to the Vliehors 25 years later … belonging to the same whale! With this find, the skeleton was practically complete. The Texels Museum, now Ecomare, had a life-sized model built around the skeleton and displayed it outside by the seals. When the terrace underwent major renovations in 2010, the model showed signs of rotting in places. The skeleton is now being exhibited next to the entrance path to Ecomare, without its enveloping model. 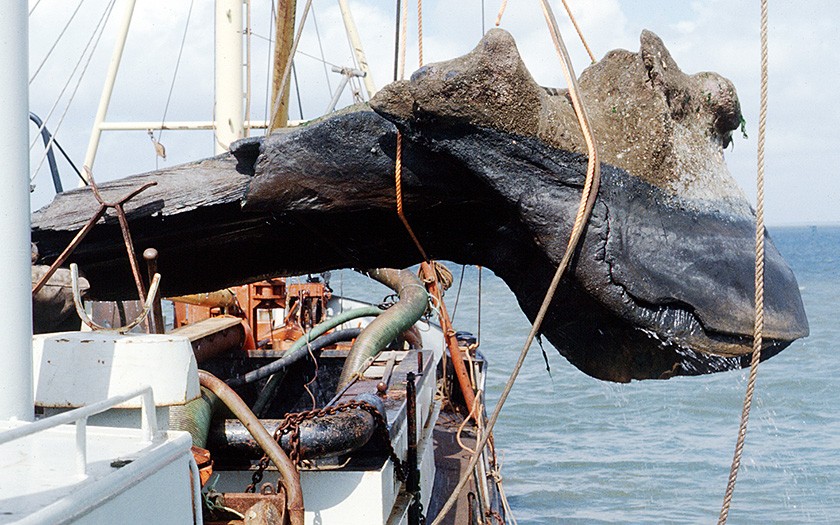